Portal to the Past 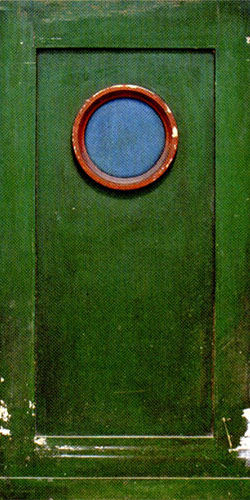 Maxfield Parrish (1870-1966) is one of America’s most beloved illustration artists. A member of the Cornish Art Colony (active 1885-1930) in New Hampshire, Parrish lived in neighboring Plainfield. The property, still in existence, consisted of a main house and extensive studio with metalshop and living quarters. It was in his studio building that Parrish lived, separated from his wife, with his model Sue Lewin.

From 1993-96, composer and artist Robin Lee recorded several albums in the studio. While there, she witnessed the alteration of the original interior and exterior spaces, with their architectural elements and detailing still intact since Parrish’s death in 1966. Though not an art historian, she had the wherewithal to realize she needed to preserve images of the property before time ran out. Touring the maze of rooms, she videotaped the last footage of the interior and documented the phases of the loss of material. In addition to the footage, she also took extensive photographs of the interior and exterior, capturing images of vistas and architectural elements such as columns Parrish had used in his paintings.

Seeing the piles of Parrish’s original and soon—to—be discarded woodwork, she was given permission to salvage material. She pulled this painted panel, which had lined his studio (visible in a period photograph of Parrish taken by Margaret Bourke—White [1917—1971]), and a turning, which matched those on a garden gate (visible in his paintings) and others she had seen in his machine shop before it was dismantled. The panel is now on view at Jonathan Frost Gallery. Ms. Lee hopes to bring the elements and images to light For the purposes of educating the public about a lost chapter in art history, through a movie For which she would compose the score.

Robin Lee is selling the historic and iconic Maxfield Parrish panel. This panel is one-of-a-kind, and now you can own a piece of history. Serious offers only. If interested, please review the essay and photos below and contact Robin with your offer.

BREAKING NEWS: Robin has discovered what is quite probably the artist's fingerprints on the back of the panel, frozen in time (and varnish). This may well be the only surviving set of Maxfield Parrish’s prints, bringing a whole new meaning (and value) to the term “finger paint.” This historic piece can now be yours, bringing you even closer to the master painter Parrish.

Get in touch with Robin Lee to own a piece of history.

We start at the frame, utilitarian object, made to enclose an opening, aesthetically creative with sense and care. Then you start “reading” for tool marks, hand work or machine work that are left, looking at the choice of wood — hardwood, probably maple — stiles, rails and panel construction.

Examining the panel he taps it to determine if it is hard wood, determining its density. He turns it over. On the back side appears to be some sort of covering — it looks like canvas — he is stumped by why it is on, why is the covering there?

Where the stiles and rails meet there is no visible sign of joinery. There appears to be two screws in each corner of the frame. Joined together in each corner, screws were counter-sunk. Screw holes appear to be filled in with wood filler.

The panel was held in place by four strips of wood that were 3/16th of an inch square. Strips of wood were fastened with very fine wire nails (brads).

Boss (n): an architectural ornamental element that projects. The motif is a boss. A ring, very exact and having a classical profile, it is PERFECT.

When positioned on the panel, it was placed with a sense of true aesthetic sense, attached to the panel with very small wire nails. It was probably turned on a lathe using a face plate. The molding of the boss was ogee form. It was attached with six small wire nails that were filled with white filling. The placement of the boss/motif is symmetrical; the panel was measured to assess if it fits squarely.

At the top of the panel is a U-shaped steel piece, approximately 1/2 inch by 1/2 inch, screwed to the exact middle of the top of the frame. It was probably used as the “guidance system” for the rolling panel.

On the bottom of the panel there is a brass plate screwed to the panel. Its purpose was to serve as a guide for sliding. There also were a pair of brass wheels which were fastened to the bottom of the panel for the panel to slide on a track. Greg removed one of the rollers carefully, all went perfectly back to the original location. what he found was a hollowed area, a “mortised” square hole where the roller would fit in. The mortise was chopped out by a chisel. The wood was slow-growth hardwood.

Each roller was made up of a cast frame and the wheel was perforated. Speculation: they were very unusual, very well-made and precise. Why the perforated wheels? He had the technology to make them. He had the ability to cast objects throughout his studio. Black enamel was baked on or applied to the cast of the wheels.

The condition and construction

There is no weathering on the surface or the back of the panel. It was used in the interior of his studio. The condition of panel as found is excellent for its age. The surface tells you this, having its original paint. The panel is in wonderful condition considering it was used to “yank” back and forth for all those decades. The workmanship had to be well-done to stand up to daily use.

Greg's personal take: Those nails were precisely placed and nailed in with much care on the strips in the back and front. It did not go out of square, it was dead square, Greg put a square tool on the panel checking the frame. Greg also pulled diagonals, tells him it is square. if it is not square, it does not function. It stands the test of time. This shows the precision and care of Maxfield Parrish's working environment.

If this panel is an indicator of the rest of the estate and estate art studio, it says to Greg that Parrish was a very organized mechanic, wood worker, and carpenter, a perfectionist. This panel tells you everything about the care and quality behind Parrish. “Just look at his paintings!” Because the estate is all gone we have to use the panel as the indicator, the messenger. It represents the quality of the studio and the aesthetic working and living environment of that studio. The panel talks. The panel is the guide to the quality of his work. He was indeed a mechanic. There were no visible tool marks, hand or machine, it was very clean.

Greg is impressed. “Objects speak, it was a fascinating read”. The panel is powerful. It is not out of your realm.

Contact Robin to own a lost chapter in art history and your own personal portal to the past. 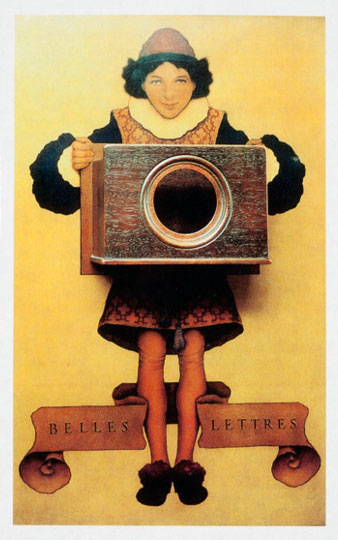 This Parrish masterpiece shows the exact round motif that is upon the famous art panel I own that Parrish made which was saved before his art studio was destroyed!

The panel in pictures 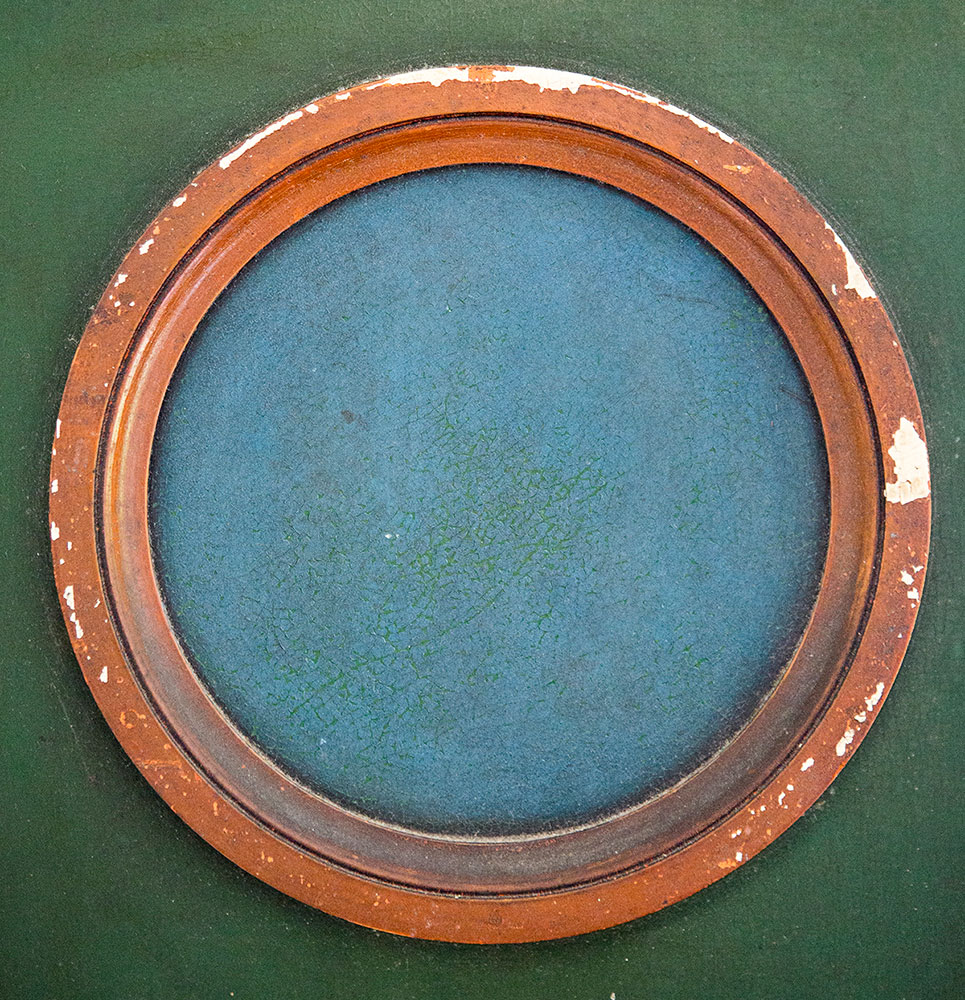 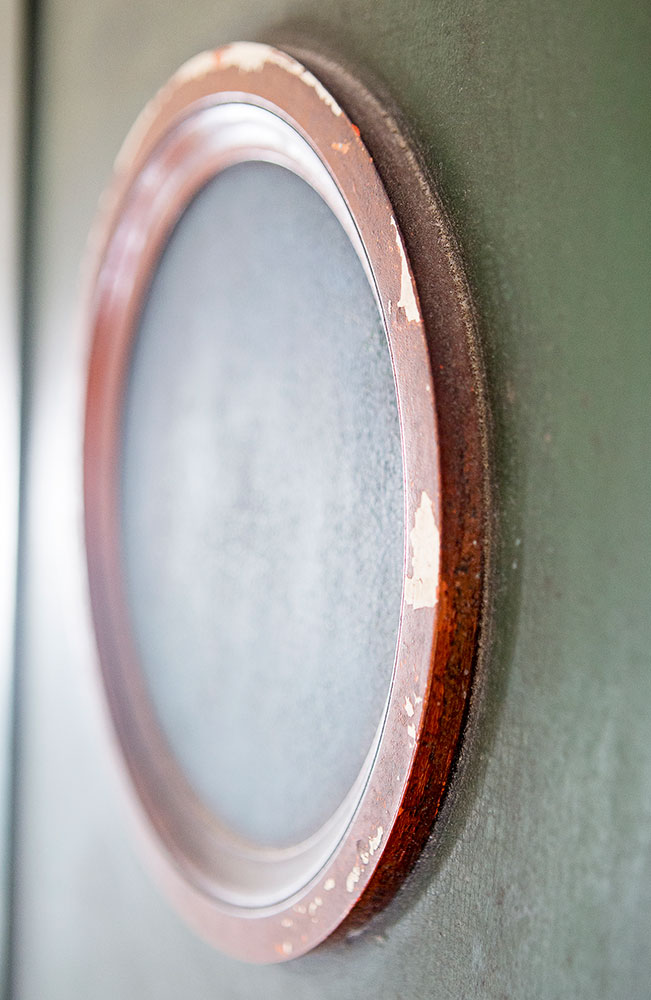 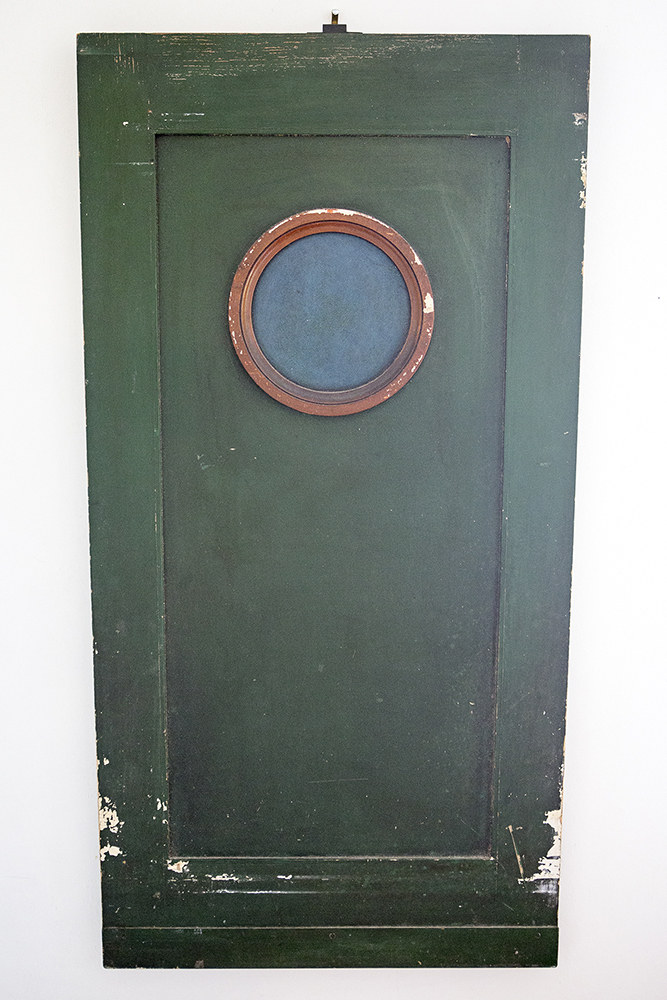 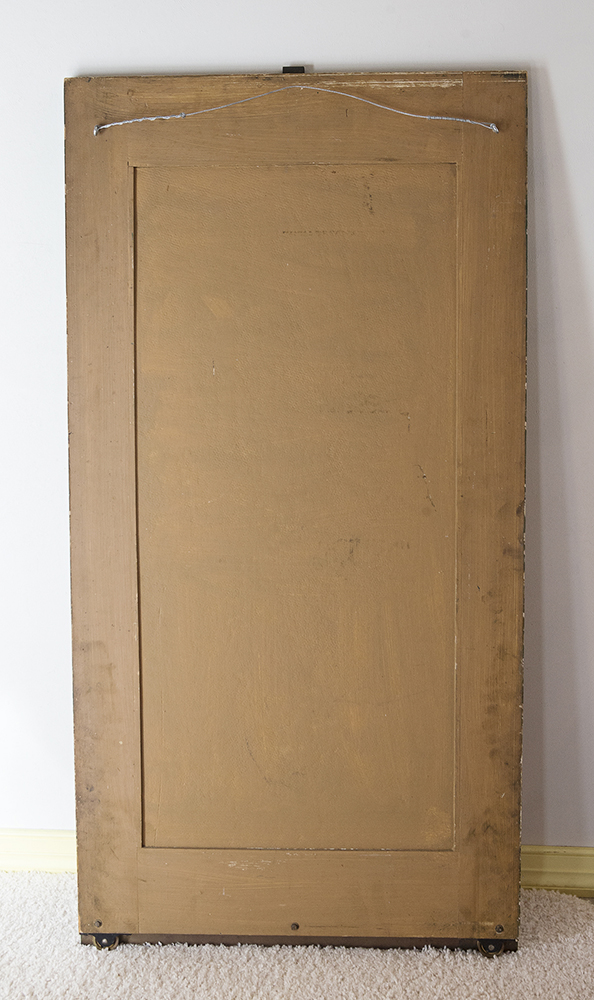 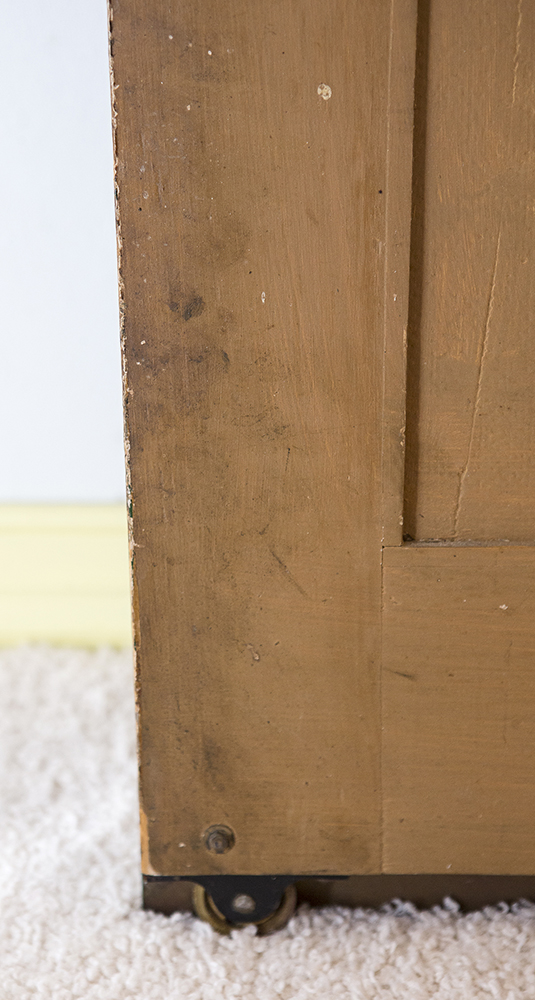 Back left of panel. 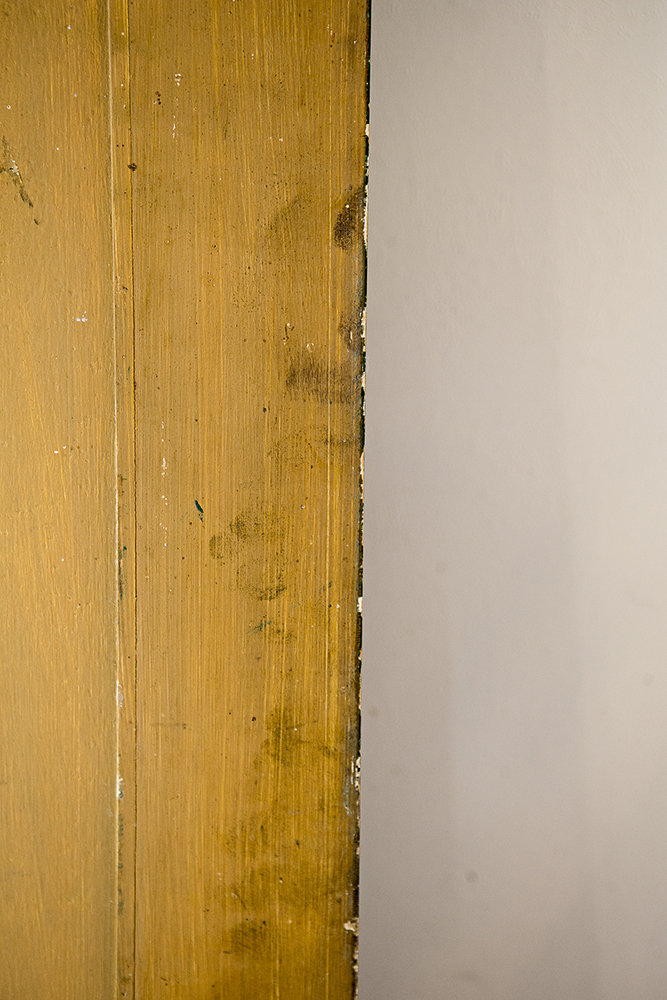 Back right of panel. 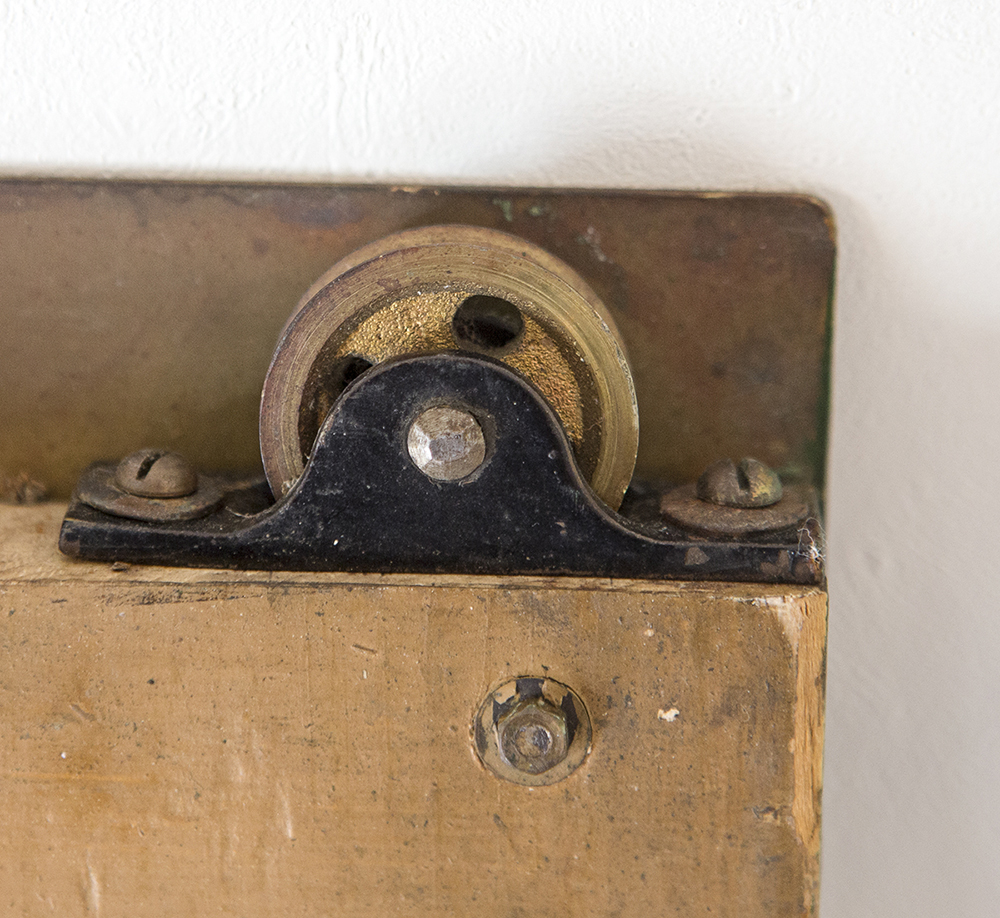